A 53-year-old female client, Rhonda, was just offered her dream job. Not too surprising until you hear that the job she was offered was with the FBI. She thought she was wasting her time, she said — the FBI hired only young (male) college students.

She had an associate’s degree in administrative science (read secretary) she’d earned 30 years ago, with experience in administrative and IT positions. Most recently, she’d worked in a commission-only interior decorating sales position. That is where our work together started.

Initially, she emailed me to explain that because of the unstable economy, she just wasn’t making enough money to earn a living. In short, she assessed her career potential and decided to make a change.

She took inventory of her interests and skills. Rhonda loved being responsible for her own schedule, the interaction with customers, and the creativity involved in targeting appropriate accessories to sell them. The bulk of her IT and much of her clerical experience was with health and medical-related companies: insurance and case management.

Rhonda sent me a copy of her résumé, which had a lot of information, but was not focused. She was using a chronological template that did nothing to highlight her skills or abilities, let alone interests! After some brief consultations, she decided that she would like to return to a more stable environment, perhaps tapping into her IT skills she developed while earning her information systems technology degree and insurance knowledge.

However, she was quick to point out that her computer skills were not up to date. She agreed to brush up on her computer skills on her own as much as possible and would research some classes she might be able to take that would make her more marketable in a short timeframe. I was able to tweak her résumé somewhat just by presenting her major skill areas in a functional résumé format. A temporary measure.

Rhonda noted that she did still have her sales job and would continue to work in this capacity until she found something that would bring a more steady income — and which she enjoyed. She was fortunate that her home was paid for and her children grown – she had a bit of time to find her focus and work to land a job that she really wanted after accepting jobs that just came along from time to time.

At one point during our communications, I came across a pseudo-governmental position related to healthcare that required IT, clerical, and research skills. She became very excited by this prospect and, when she thought about it, realized that the most enjoyable part of all of her jobs had been researching….

Rhonda loved researching issues, finding better ways to process and track information, and understanding how and why. She put these skills to use learning more about this position and the agency. She fashioned a fine cover letter and even was able to secure references from local politicians she knew. We tweaked her résumé to ensure that anyone could immediately see that she was an excellent match for the position.

She continued in her sales position and searched and applied for other positions. Rhonda also followed up with the contact for the pseudo-governmental position. Unfortunately, she was never able to get a return call, let alone an invitation for an interview.

Her spirits were dampened. She became increasingly frustrated by the lack of sales she was able to secure in interior decorating. She wasn’t identifying any other opportunities that seemed interesting to her. I suggested a career counseling session to firm up a career plan for her.

She was 52 at the time – she didn’t need a career plan, she needed a job! I didn’t argue with her, but suggested we spend an hour or so discussing her likes, dislikes, and short- and long-term life goals. This, I explained could help us make a career plan that would give her the focus she needed to be successful in her job search.

We met at a restaurant she knew near her beach home. Somewhat skeptical about how I could help, but eager to be helped just the same, she arrived with a notebook and pen in hand. Rhonda was thoughtful, forthcoming, and ready to make a change.

We talked about all the jobs she had held. What did she like about them? Again, the research came up. Computers, of course, she enjoyed working with — and people. She liked working autonomously, but was comfortable working in an office at a desk as well. As we talked, something just clicked and a thought struck me: I recommended she consider working as a private detective.

She stopped and looked at me with her mouth open for just a moment and exclaimed that she had considered this in the past and had even been offered a position with an acquaintance to work as a private investigator for insurance claims. However, her husband had just died and she had two boys to raise. A part-time job in an untested field would not work for her.

Although she loved the idea of this type of work at the time, she accepted a position in a much more conventional role as an administrative assistant. It wasn’t bad, she explained.

She was promoted from her clerical position to an IT position when she showed an aptitude for this. She had springboarded from that to eventually work as a supervisor in IT until the death of a relative led her to leave that to take over the family business selling interior decorating accessories.

A big smile spread over her face. Working as a private detective! She had worked for years in a career path that fate had handed her. My client had not given any thought to what she might like to do and/or how to obtain a job she liked.

She became very animated. She had been taking notes the whole time she talked and looked at much of what she wrote and thought about this revelation — then asked if I would help her find a job as a private investigator.

It just so happened that because of my experience in the Workers’ Compensation field,I did have contacts with several agencies to whom I could refer her. We planned how to change her résumé even further to make her more attractive to this specific job target.

We discussed social networking and various websites that she could use as a resource:

She was able to secure several interviews with my contacts (some of whom were not hiring at that time) and some with her own research. She was well received and thought she might be offered a position in the spring, when some of the companies indicated they would be actively hiring.

My client continued her job search as she still didn’t have a bird in her hand. She came across an ad for the FBI and it intrigued her. She read and reread it and went to the library to check out a few books about the FBI. She surfed the internet and learned everything she could while she worked on her application.

Rhonda called me while she was finalizing her application and laughed when she told me she couldn’t believe it: She was going to apply for an analyst position with the FBI – it sounded perfect! But, she had concerns.

They stated they wanted to hire someone with a bachelor’s degree and she went on to note that they hired college kids and, she believed, probably mainly male college students. By now she had turned 53. She had no business applying to the FBI. Was she nuts, she questioned?

I counseled that the federal positions most often considered experience in lieu of education in a formulaic manner and that, no, they did not hire only young people straight out of college. If she was interested in the position and felt that she was able to present the knowledge, skills, and abilities they were looking for, then she should apply. What did she have to lose?

She was called for an interview not long after submitting her application and continued to research her new potential employer. Rhonda reported that the interview was brutal – several people in suits with serious faces grilled her in an empty white “interview” room. Although she was nervous, she reported she felt confident and that she had done well.

It is very encouraging to see people that not only are able to find employment, but able to secure positions that they would have never considered a few short months ago and in which they will find happiness. As adults, we spend a large part of our lives working – why not plan to enjoy it?

Article courtesy of the Recruiting Blogswap, a content exchange service sponsored by CollegeRecruiter.com, a leading site for college students looking for internships and recent graduates searching for entry level jobs and other career opportunities. 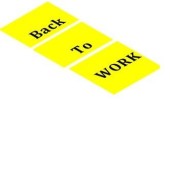 Mary Sevinsky is a career expert and author with nearly 20 years of experience in résumé writing, personal branding, career assessment and counseling. She can work with you to synthesize and highlight your unique skills and abilities to obtain interviews for the positions you want with the employers you want to notice you. Her Experience & Qualifications include: Skills: Résumé and Cover Letter Development; Biographies, Career Counseling, Interview Preparation, Career Transition and Career Change.

How You Convey Your Personal Brand Online