Find Your Career Icon for 2018

If there’s one sure-fire way to get you fired up about your career in 2018, it’s identifying an icon or role model you can look up to and learn from.

Though it helps to have real-life mentors – people in the workplace you can meet for coffee or have a formal discussion with – it’s also important to find some icons in the wider world. You may never get the chance to pick their brains in the office, but they can still inspire you to aim higher in your career.

She reached the #2 spot in Fortune’s 2017 list of Most Powerful Women, and Indra Nooyi is someone we should all admire. She’s pushing for healthier alternatives of her company’s key products, including reduced sugar, salt, and fat content, and she was quick to pull that controversial ad with Kendall Jenner (the one that tried to get involved in #BlackLivesMatter, but entirely missed the point). Since 2006, she’s been the driving force for this huge and high-profile company, and she’s also raised, two children.

Nooyi keeps in touch with other CEOs from completely different industries, which is great for peer learning and insight, but she also does one amazing gesture: she writes to the families of her senior employees because she believes we owe our parents for our own success.

Your career takeaways from Nooyi: acknowledge the people behind one person’s victory (or, indeed, failure) and give credit where it’s due. Don’t be afraid to take risks, but act responsibly and swiftly when things do go wrong.

These two new editors have recently taken on the most pressurized role in the magazine business. They’re now responsible for producing a monthly magazine, and supervising rolling content online and across social media channels, at a time when readers have never had more distractions from, well, reading an actual article. Enninful, in particular, has embraced the new role, making his team and magazine more diverse.

What’s unusual is that both Enninful and Curtis don’t come from traditional journalism backgrounds, like their predecessors – they have both been fashion directors, spending a hefty chunk of time organizing photo shoots, looking for the latest trends, and attending catwalk shows. Suddenly, they will be glued to computer screens or sat in high-powered meetings, and covering all kinds of topics, from beauty to politics. Find out more about Curtis’ transition to the editor here.

Your career takeaways from Enninful and Curtis: Don’t feel tied to a traditional career trajectory. If you want a different job in the same industry, why not go for it? Learn from those in the know, and find out which transferable skills you need to work on to make the move.

Dubuc runs A&E, which includes television channels like History and Lifetime. She knows her audiences inside out, and doesn’t think much of the stereotypes foisted on viewers, telling The Hollywood Reporter, “The No. 1 show for women in the United States is The Walking Dead,”.

She is also known for adding plenty of fresh ideas, including commissioning scripted dramas or reality shows on channels better known for documentaries. Whilst her company’s status is threatened by the likes of Netflix and Amazon Prime, she continues to push boundaries and track down the next big thing.

Your career takeaways from Dubuc: Show your worth in the workplace by really understanding the customers or audience you serve. Be ahead of the curve and work out what the next big thing is, then tell your boss about it and demonstrate how you think the company could make it work.

The worldwide Girlguiding movement (much like Girl Scouts) has never been cooler. Its UK image wasn’t too great a few years ago, though. That all changed, thanks to CEO Julie Bentley, who took over in 2012 and quickly labeled Girlguiding the “ultimate feminist organization”. Today, guides get involved in politics, take an annual survey, and have an Advocate Panel covering issues like sexual harassment. Guides also support their local Pride events for the LGBT community. Pretty impressive for an organization once seen as stuffy and middle-class.

Before joining Girlguiding, Bentley had already spent several decades working in the third sector, first as a youth worker, then working for charities who helped people with drug and alcohol problems, personal safety concerns, or sexual health issues. When asked who she thinks young girls should look up to, she suggested the activist Malala Yousafzai.

Your career takeaways from Bentley: If you’re interested in a career where you can make a difference, start volunteering now. Make a noise about the issues that matter, and network with like-minded people. Once you start working for a charity or non-profit organization, you’ll build transferable skills and you should see job satisfaction when you get to implement change.

Whoever your career icon is, use their wisdom to accelerate your own job goals. Follow them online, learn from their successes and failures, and start planning your next career move. 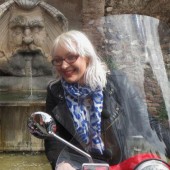 Smash These 3 College Habits Now — Before They Ruin Your Career

3 Reasons You Are Not Getting Promoted