How I received an 80% Resume Response Rate when Changing Careers

You desperately want to land the job of your dreams.

A job where you’re not only paid a healthy wage, but where you’ll really be happy.

The problem is you’ve no idea how to stand out from the crowd. Making a great first impression in this increasingly competitive job market is becoming progressively more difficult

It’s a problem which has derailed many a good candidate’s application. But you, well, you’ve got an extra problem to overcome.

It’s the same situation a good friend of mine recently found herself in. After years of working between the big four, she wanted to switch careers. Not a minor career switch to another financial corporation or accountancy firm. No, my friend decided on a full 180 and wanted a job in the nonprofit sector.

Hell of a change right! And one that seemed damned near impossible. After all non profit and finance aren’t known for their close working relationship.

Knowing she was about to embark upon an uphill battle she came to me for a little advice. As a copywriter I’ve helped high level employees in prestigious firms polish their resumés, write informative professional bios and compelling LinkedIn profiles.

But even with my experience I knew this wasn’t going to be easy. After a few lengthy Skype calls, some extensive revisions and a lot of coffee, we optimized her resumé with some great results.

As I sit here typing this my friend is preparing for no less than four interviews in the nonprofit sector. A pretty good result, right? But considering we sent a total of five applications, it’s pretty damn amazing.

Getting an 80% response rate from the applications was no cakewalk, but it is achievable for people like you who are considering a change in career.

To help you achieve the same level of success as my friend, I’ve detailed the major steps we took when revising her resumé.

Start from Square One

This is one of the biggest mistakes you can make when changing careers. The resumé you have, the one that’s worked so well for you up to this point, was created for the industry you’re now trying to flee.

A few minor changes aren’t going to capture the attention of a recruiter in your new target industry.

You need to go back to square one. Put your current resumé to one side and start with a blank canvas. A blank canvas is an absolute necessity for tailoring your resumé to a brand new industry.

Most resumés take the good old fashioned chronological approach. They chronologically list all previous job titles starting with the most recent.

However, when you’re looking to change career, your job titles don’t hold the weight they would if you decided to stay on your current career path.

To highlight the strengths of my friend we utilized a combined resumé format. A format where the opening page details skills and achievements with the following page adopting the more widely accepted chronological format.

Opening the resumé with her skills served to capture recruiter attention. We knew if we led with her employment history it would fail to impress. Seeing a historic run of financial positions could give the impression she was unsuitable for the role and lead to her application being immediately eliminated.

Focus on the Major, Transferrable Skills

Let’s be honest. Most of your past skills and achievements aren’t going to be suitable for the role you’re applying for.

Listing your skills on page one of your resumé isn’t enough. You need to carefully choose which skills you highlight. You need to focus on the major skills and achievements that are transferrable to your target role.

For instance, my friend was applying for project management positions. Her knowledge of the financial industry and the achievements/awards she had obtained would hold little weight in the nonprofit sector.

Instead we focused on her financial project management skills. How she’d taken certain projects successfully from conception through to implementation, the number of people she managed, the teams she corroborated with and brought together for a common cause.

These were all skills which could be directly transferred to the position she was applying to and would establish her as a more valuable candidate.

Saying you assisted in a success is nice. And nice, well, that’s a word people use when they have nothing good or bad to say. It’s what I like to call a non word.

Your historic achievements have been hard won. You’ve worked hard to get to where you are today. You need to show how your hard work has paid off in no uncertain terms.

For instance. Saying a movie made more at the box office than its budget sounds nice. It’s a success right? But if you take a second to think about it, how successful was it.

Did it make $1 more than its production costs or has it made an extra $300 million? Both are technically successes, but one is far greater than the other.

Every achievement that could be quantified on my friend’s resumé was. We applied numbers or percentages to the relevant achievements ensuring they really stood out and established her as a kick ass candidate.

In her time at the big four my friend managed numerous projects. But was she a project manager? No.

Her title was typically boring financial jargon that few outside the financial world would understand. So what did we do? We tweaked her titles to place better emphasis on her actual duties.

A small change, but one that led to the inclusion of a keyword.

It sounds a little underhanded at first, but it’s no different to adding a few bells and whistles to your experience and making what could otherwise seem boring into the fantastically interesting.

You’ve got to be careful doing this. You can’t just slap a relevant keyword on the end of your current job title. You have to make sure that it pertains to some of your real life job duties or you risk destroying any credibility you have.

Do You Have any Related Non Work Experience?

Have you done anything in a non professional capacity that could help you in your targeted position?

Fortunately for my friend she had a huge amount of not for profit experience. She’s volunteered for various charities for years and is involved in many non profit organizations.

All we had to do was pick out a few key achievements in these areas and add them in visible places to here resumé.

Your non work experience likely won’t be enough to land the job on its own. However, if you utilize a few smart design tips and place the biggest achievements in key locations throughout your resumé, these achievements could add that extra layer of authority you’re looking for.

Switching Careers is all About Finding the Overlap

Look, you’re a smart person. If you weren’t you wouldn’t be here reading about how to optimize your resumé for a massive career change. You know that simply using the same resumé you always have isn’t enough to convince recruiters in an entirely different industry. You know you need to take a new angle and tact.

And, if I’m being honest, a smart person like you only really needs one piece of advice.

Your past work titles aren’t going to help your job hunt. But your experience might. The trick to appealing to recruiters in a new industry is finding the overlap between your past experience and achievements and how they can help your target business achieve their goals.

Do that and you’re pretty much on the way to a new job and dream career!

If you still want to learn a little more about how to properly optimize your resumé, check out my new eBook Resume Writing: 6 Simple Steps to Selling Yourself and Landing the Job of Your Dreams. It is free from April 5 to 9, 2016! 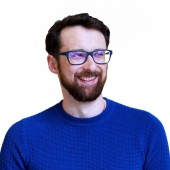 Pete Boyle is a professional copywriter who has worked with various companies to produce killer copy that builds brands. He also runs the site Have a Word where he offers advice and training to ambitious writers who want to make it in the freelance world.

An Interview with Resume Writer Irene McConnell About Growing Her Business

How To Write A Captivating Résumé For A “Boring” Job