[Success Story] How Sheri Got Her Job Using LinkedIn

Ever had an experience like this one? You hear from a former colleague or long-lost friend out of the blue, only to discover they want to “network” with you because they’re looking for a job. This was my experience back in 2008. At that time, I made a decision: I will build and serve my network now, rather than waiting until a job transition forced me to reach out to people with purely selfish motives. Instead, I would cultivate a powerful group of supporters to whom I could offer support. In turn, if (and likely when) I wanted to change jobs, I’d already have a safety net.

LinkedIn played a large part in my strategy. Whenever I would meet someone new at an event, meeting or conference, I would hang on to their business card and reach out to them with a personal note to connect. To stay in touch, I’d review the weekly LinkedIn update emails and follow up with a note of congratulations on job changes, new pictures or other significant events among my network. Nothing fancy; just a short, simple way to stay in touch. Of course, I continued networking face-to-face, volunteered for several industry associations, always remaining active (and visible) in my marketplace.

Fast forward to 2010: my job was eliminated. Luckily, I was given an 8-week heads up from my employer. And, thankfully, I had a great network in place in my marketplace and on LinkedIn.

To get started in my job hunt, I subscribed to the LinkedIn Job Seekers option, created an audio/visual resume using Goldmail and posted it as an update. I sent my Goldmail to many of my contacts, and asked for their help in locating my next big thing. (This approach created a small buzz amongst my network and the industry, since it was such a creative approach — an important piece of the puzzle for someone whose expertise is in marketing! Note: If I had to do it over, I’d make the Goldmail much shorter.)

Within two weeks of my LinkedIn Job Seekers subscription, I noticed the listing for my current role. It was as if the job description was written specifically for me. Sadly, the position was more than 1,000 miles away from my home, and I did not want to move. I didn’t let this phase me. I carefully crafted a customized cover letter and sent along my “standard” resume. Then, I reached out to everyone I knew who had a connection with this firm, asking for their insight and guidance. Within 30 minutes, the HR group had reached out to me to schedule an interview. Meanwhile, my network was busy at work getting the word up the chain of command about my experience and expertise.

Even so, the job wasn’t a shoe-in. The company had never hired a remote employee for their marketing department. Several times HR thanked me for my interest, saying that because I would not relocate they would be pursuing other candidates. I didn’t give up and neither did my network. They were advocates for me up until the day I went in for my final interview. They sent notes to the Chief Marketing Officer, made calls on my behalf and provided glowing recommendations. When I had my final interview, the CMO said, “You know quite a few people, and they are very persuasive.” It really wasn’t an interview at all; it was a discussion about how they’d be hiring their first remote employee! 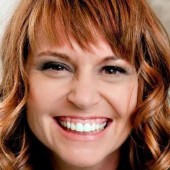 Sheri Fitts is a leading marketer and strategist in the retirement plan arena. She values sharing and connecting within her marketing place, using in-person and online networking.

How to explain a career gap on your LinkedIn profile

3 LinkedIn Profile Settings You Probably Don’t Know About But Probably Should!

Turn Your LinkedIn Profile Into an Attractive Infographic