Job hunting for Generation Y is far from straight forward. Not only do they have to impress with their résumés and in interviews, but they now have to pass an out of office test – one that perhaps many aren’t aware they’re even taking. The dawn of social media has meant that parts of our lives that were kept out of the workplace are now public knowledge (if your privacy settings up to scratch that is).

A study carried out by CareerBuilder in 2012 found that out of 2,300 recruitment professionals, nearly 40% use social media to screen applicants. Another piece of research along similar lines by the New York Times found that 70% of those asked have not hired someone because of what they found while screening them online.

Those less than flattering tweets about an old boss that was particularly disliked or the Facebook picture of them, drunk and practically naked are no longer private jokes between friends. But do young people realise? Well not according to a survey by Findlaw.com; only 29% of young social media users (18-34) have posted a photo or status/comment that they worry could affect their career prospects. So around 70% of young people seem to be blissfully unaware of the damage they are potentially doing to their careers by being careless online.

But are young people just completely ignorant of the impact their behaviour on social media could be having on their professional life? Or is there something a little more complicated behind these figures?

This generation has been brought up with Facebook and Twitter as part and parcel of their lives. Ever since they hit their teenage years (often even younger), they have been updating their profiles via social networks at least a few times every day. At that point those pictures of a drunken house party are seen as a sign of popularity or the provocative pose is seen as merely a show reel of their attractiveness. So it’s unsurprising, if after graduation they aren’t aware those types of pictures – even if taken a couple of years ago – are maybe affecting their ability to land a job.

Things that used to be kept in private photo albums or sealed away in the part of mind not used in the office are now easily available to employers. Some members of the older generations reading this can maybe imagine the damage that could have been done to their careers if they’d lived the sixties, seventies or eighties through the internet. Though we’re straying a bit into the right and wrong, fair or unfair, territory here, it is an interesting thought to consider nonetheless.

Equally it is a possibility that young people are caught off guard that their Facebook profile is actually more likely to be screened than their LinkedIn profile – 65% to 63%. The account they created with the sole purpose of impressing an employer is bypassed in favour of an in-depth look at your ‘private’ life.

There’s also the issue with the difference in values and idea of what is acceptable and not. A twenty-something applicant thinks a house party (apologies for the repeated example) is great fun; a forty-something employer thinks it is evidence of irresponsible behaviour. A young applicant may think a photo of themself smoking marihuana is their business – an employer might, but almost certainly will, deem it an undesirable quality. And the list goes on.

Social media can just as easily have a positive impact on a young person’s career prospects. The digitally savvy generation of today are in the perfect position to manipulate social media to their ends. If they are prepared to think outside the box when applying for jobs social media becomes a valuable tool in their arsenal – a way to skip ahead of older generations.

There are numerous examples of social media being utilised by people who want to get ahead in the careers game. Take Matthew Epstein for instance, he was young and had been blocked at every turn in his hunt for a dream job so what did he do? He created a YouTube video which went viral on Facebook, LinkedIn and Twitter. He got invited to interviews with both Google and Apple; a perfect example of why young people’s comfort on social media, and online in general, can be a real positive.

The fact that social media is being used to screen them is probably not something that sits well with young people. However, if they pre-empt the almost inevitable search they can sculpt their profiles to be exactly what they their potential employer wants to see. And let’s face it young people are far more likely to have caught onto this possibility than older people are.

Even if they struggle with that, most young people are wise enough to have updated their privacy settings to lock down their profile from any prying eyes. This is something that older users of social networks might not be savvy enough to do – leading to the tables being turned as they are now hindered by social media.

People under the age of 30 are far more likely to be active users of any social network than someone over 30. That’s hardly ground-breaking research – it is obvious. Although so much of this debate is focused on the damage a reckless user can do to their prospects, social media users could just as easily find their activity working in their favour.

In the same survey referenced above by CareerBuilder, 29% of those surveyed had found something that had caused them to hire a candidate. A selection of the reasons cited were a good feel for the candidate’s personality (58%), great communication skills (49%), candidate was creative (44%) and well rounded, showed a wide range of interests (51%). These are things that perhaps an older candidate is not as likely to be demonstrating on their social profiles – if they even have them.

By no means was this article intended to be conclusive in either direction. Whether social media is definitively a positive or negative for young job seekers is fairly subjective – after all it depends how clever they are at using it. Though, it does appear that social media’s role will only grow in the employment market over the coming years; so this is an area that perhaps needs to be explored (especially with the current rate of youth unemployment) in more depth. 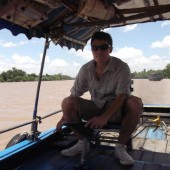 Josh writes on all manner of topics relating to digital and online recruitment. In this case he is writing on behalf of a recruitment firm based in London called Workfish who specialise in careers in social media, communications and PR. He is always happy to debate the content of his articles so feel free to add your two cents worth in the comments below!

How to create and maintain a credible blog

Getting an Internship or Co-op Using Social Media

How to Survive and Thrive a Job Loss When You’re 50+/- Years Old Part 3: Finding Your Way to a Better Life

Social Media? I’m Not Convinced Yet…